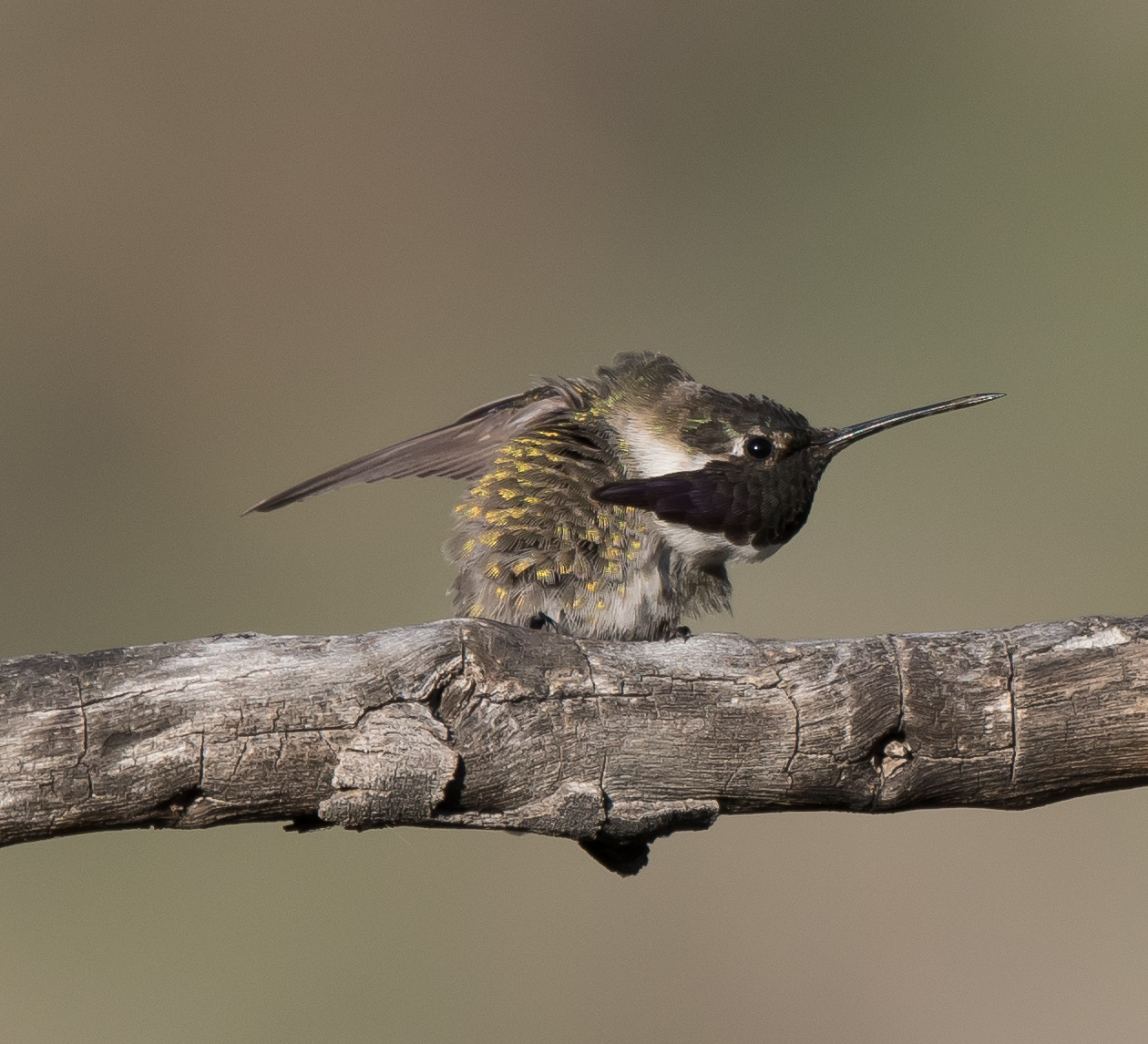 We knew we were departing this wonderful place on Sunday, so we tried to take advantage of the few hours we had.  Chris Rohrer and I headed down a trail that we had briefly visited on Saturday to see how far we could go.  It followed the stream and was lush with all kinds of trees and shrubs, but the hillside was right there as well and we heard and found Five-striped Sparrows.  And we were seeing a lot of the regular birds that we had already seen.  We did however heard the call of a White-tipped Dove in the canopy.  As we ventured back after hitting a dead end that appeared to be impassable, we heard a very loud and unique song coming from the upper canopy.  As it seemed to be moving as it was calling, we finally caught a glimpse of a small bird flying across our path.  Chris headed to the back side of the tree it landed in, while I stayed on  the near side.  This bird was not making it easy for a clear view and an ID, but Chris did manage to snap a couple of photos of it in the dense leaves of the tree.  We had found the Sinaloa Wren!  A new life bird for the both of us.  Unfortunately, I did not get a photo of this bird, but Chris did and he deserves the credit for the photo I am posting.  He graciously gave me permission to use this photo in my blog. 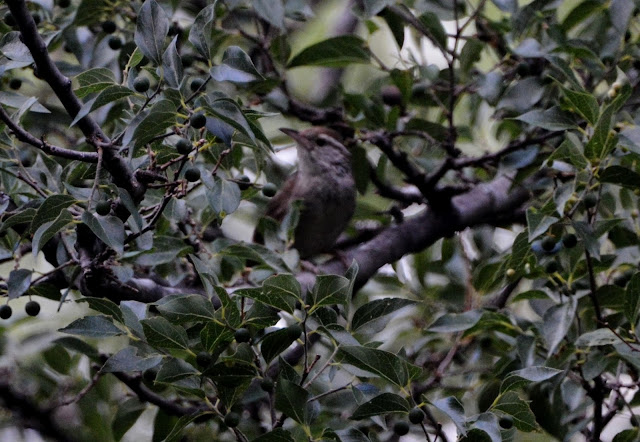 About mid-morning back at the house, I walked out the front door and spied a snake sticking its head through the pillars near the stairs.  I snapped a couple of photos of it and alerted others nearby, it must have realized that it had been seen and took off.  It was quickly identified as a Coachwhip, and was very colorful in my opinion.  Jim was going to try to catch it as it is non-venomous, but I heard him mutter as he hurried past me, 'I wonder how many times I am going to get bit!'.   I had never seen this species of snake and of course had no knowledge of their behavior.  They are extremely fast and can disappear very quickly and this one did just that.  Even though they are non-venomous, they are notorious for biting a lot if caught and handled.  What fun this was to find and observe. 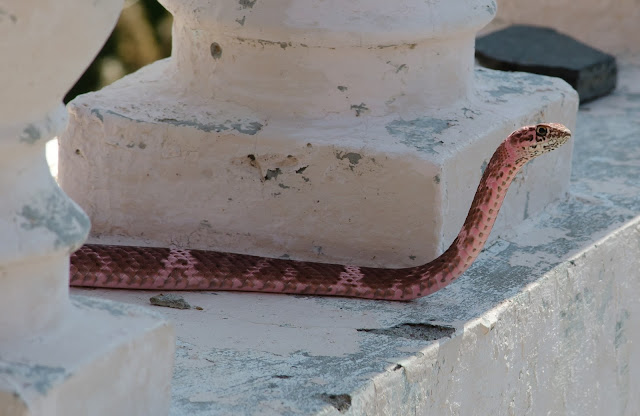 A new hummingbird made an appearance at our feeders this day; a male Rufous Hummingbird at first was timid about coming in for a sip of nectar, but as the morning wore on he got just as bold as the others.  Rufous Hummingbirds breed and nest in the far northwestern part of the US and up into Canada and Alaska, so this bird just happens to be one of the early migrants headed back south.  The males tend to migrate earlier than females and a few have already been reported in Arizona in migration already. When one thinks of the miles these birds travel, it is amazing.  Here is this little 3 to 4 inch bird that has already traveled probably over 1000 miles.  This is part of the awesomeness of nature and they are gorgeous hummers. 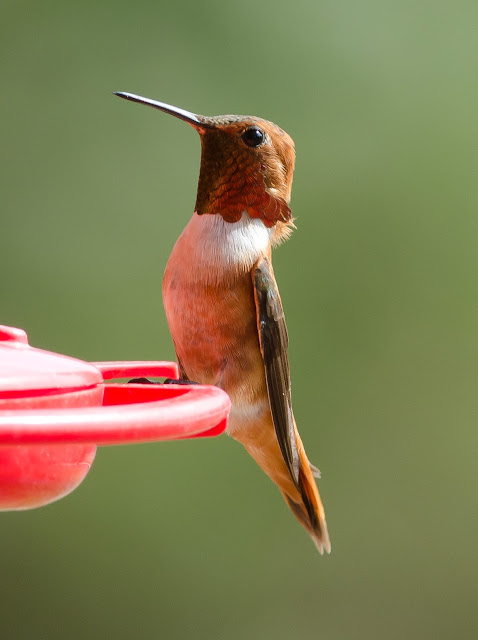 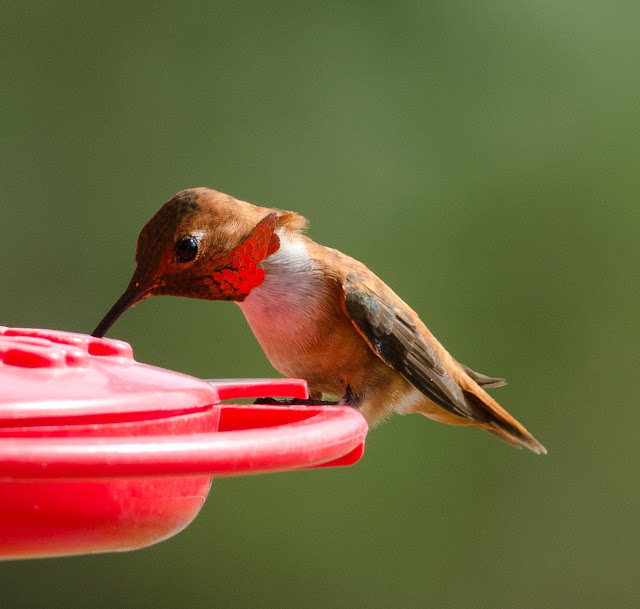 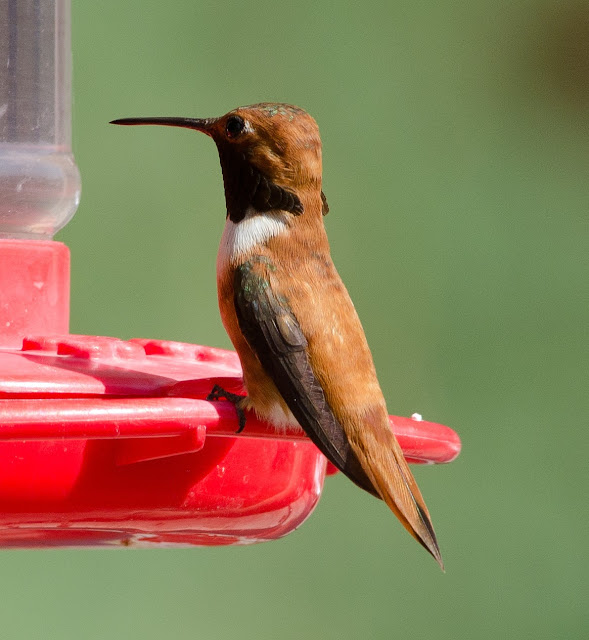 And the Violet-crowned Hummingbirds were still around and of course I took more photos. 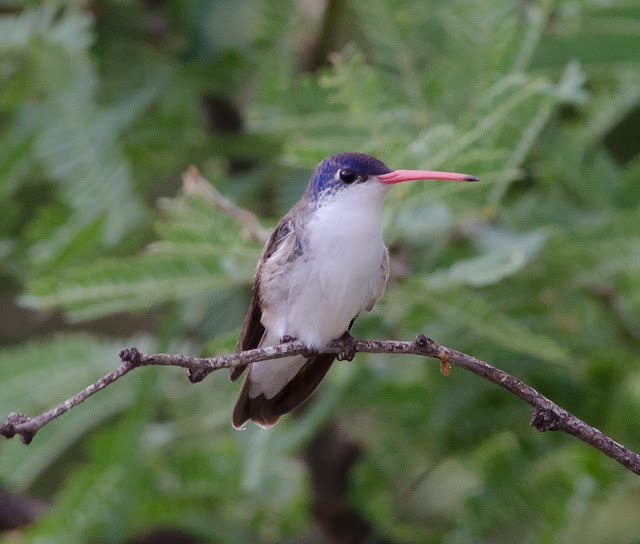 On Saturday, I had crossed one of the small tributaries of running water and managed to find a quite colorful beetle.  I had no idea what it was, but just had to take some photos.  Since my return, I have found out that this is a species of a Leaf Beetle.  Thanks to a Facebook friend who helped in the identification of this and also gave me this link for those that are interested.  They change colors as they reach sexual maturity.  http://arizonabeetlesbugsbirdsandmore.blogspot.com/2010/09/color-changing-leaf-beetles.html 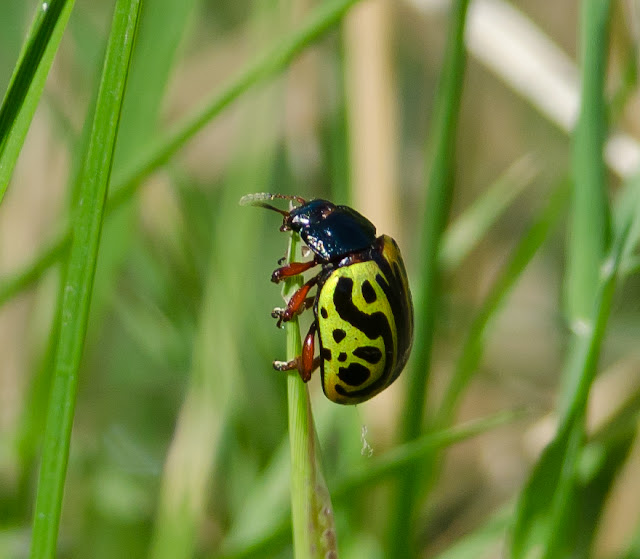 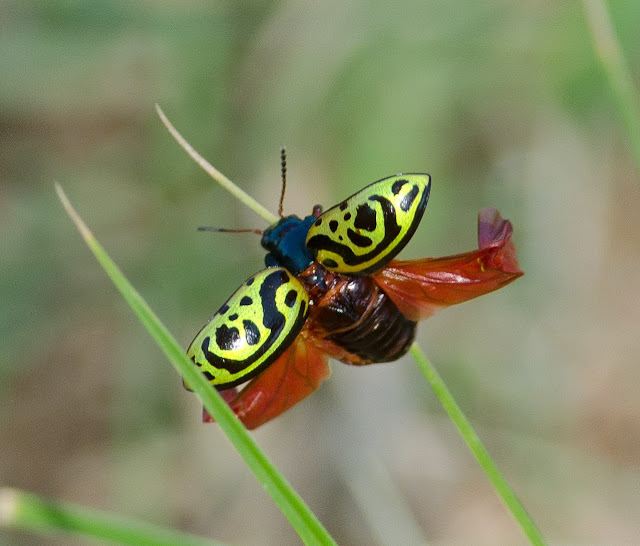 Here is a photo of the small stream and Chris maneuvering the crossing. 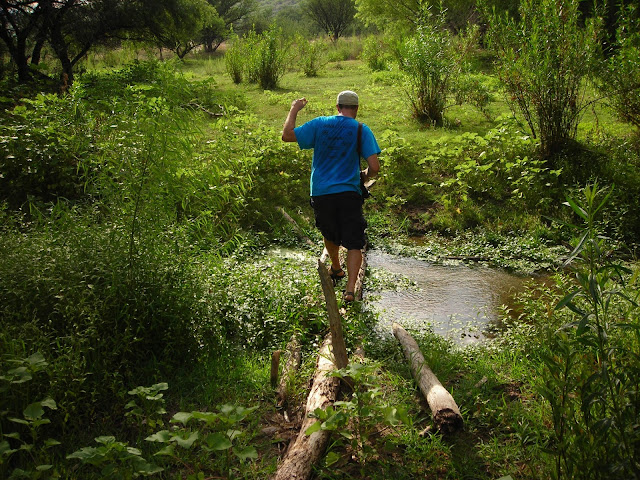 The final creature photo is one of an Earless Lizard, but I am not sure of the exact species, it might be an Elegant Earless Lizard.  Loved the yellow stripe on this and it is a new one to me. 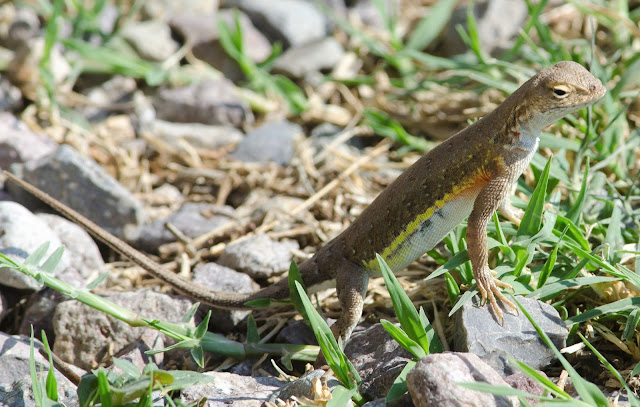 We finally packed up and left in the early afternoon, but our return trip took us east so that we could use the border crossing in Naco, AZ as it would be far less crowded on a Sunday.  On the way, we stopped at the Cocospera Mission ruins.  This mission was under construction in 1695 so the ruins are well over 300 years old.  They have erected a support to prevent it from totally collapsing.  There is also a small cemetery in the back with burials as late as early 2000's. 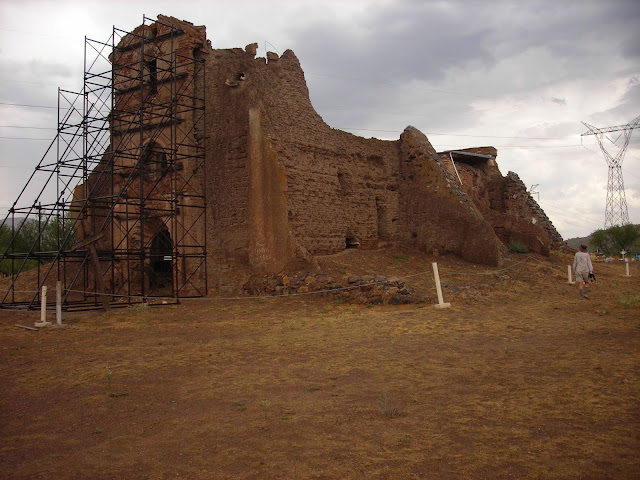 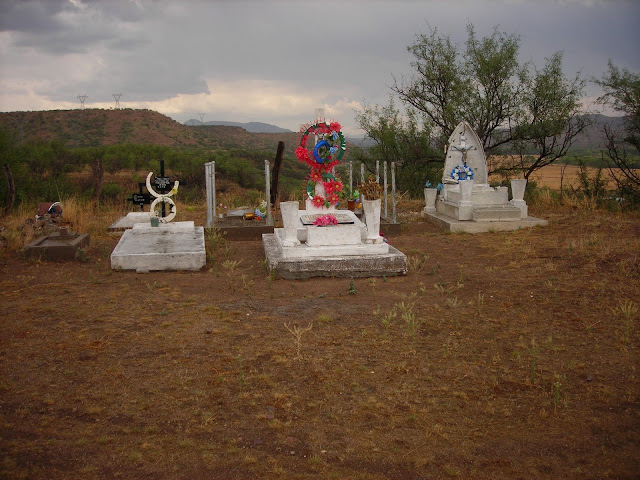 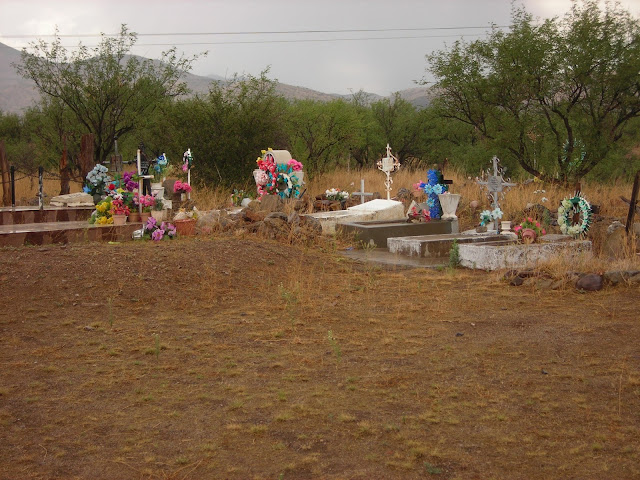 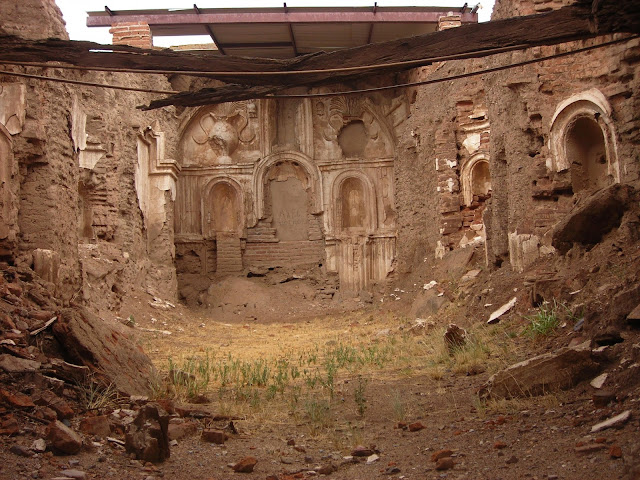 Ruins of the interior of the Mission

What a wonderful 3 day visit; new faces, new scenery, new birds and new creatures.  A place that I think would be awesome to visit in spring or fall migration sometime.  I just might have to get some birders together for a future visit.